While building a three-story, 15,000 square foot home, a Canadian health scientist had aspirations to connect every part of the sprawling residence into a single easy-to-control network, but he had trouble finding an integration firm cut out for the job. After an exhausting search for the right team, the homeowner found Station Earth, a Canada-based integration firm, who designed and executed a complex yet intuitive system around the award-winning ELAN Entertainment & Control System.

“When we were brought in on the project, the house had already been pre-wired,” Station Earth Sales Manager John Stumpf explained. “The previous integrator was wiring for a different control platform; however, upon hearing the homeowner’s stated requirements, we chose ELAN with Lutron as the consummate choice. Luckily, ELAN was able to seamlessly integrate into the wiring, resulting in a successful installation.”

The ELAN system travels throughout every inch of the three-story home, including the indoor pool and outside to the tennis court. Inside, Station Earth designed a dedicated gaming room for the family, complete with three gaming stations, a wall-mounted 90-inch LED TV and a pool table. “What might seem like overkill in some rooms fits perfectly into this space,” Stumpf said. “The outcome in the Great Room is simply breathtaking.” 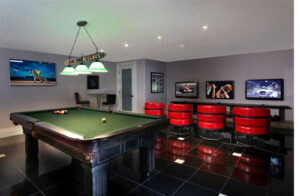 To keep the family entertained throughout the rest of the home, audio and video components were added to nearly every room. Each ELAN touch panel offers Sirius Radio, Music Server, Airplay, online streaming services and local FM radio, while 1080p video can be summoned to any of the home’s 13 televisions or the home theater with the push of a button. “Ease of use and intuitiveness were the top requests and ones that we hit the mark in this project,” Stumpf stated. “Every family member and relative that uses the ELAN-based system comments on how simple it is to control.”

To operate the system, Station Earth strategically mounted ELAN touch panels, Apple iTouch devices and Lutron keypads into the walls. If the homeowner is away from his home or on a different part of the property, he can operate the system through smart phones and web-based tablets. Stumpf added, “While traveling, the clients can verify the comings and goings of the housekeepers, landscapers, snow removal, pool servicing technicians and dog walkers, simply by checking the alarm history and the camera footage. They can see all activity in and around the property through the ELAN App on their smart device.”

Thank you for joining us here to explore and enjoy our Blog and Newsletters. If you have content to contribute, please feel free to contact us for consideration